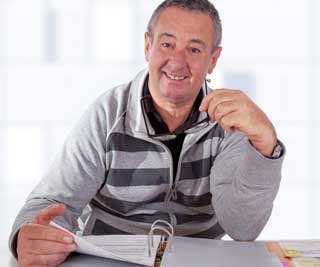 Tom’s brain injury recovery goals were to use heart coherence tools to help relieve anxiety, to help his attention, memory and reading comprehension, and have more clarity in using the Quick Coherence® technique. He was able to make the heart-brain connection, noticing that he felt less anxiety and stress in his body, felt calmer and able to think more clearly. He liked the feeling of being in a calm neutral feeling place. It gave him a feeling of having more control when so much of his brain injury deficits were beyond his control. Tom was excited to go home and look up the word Neutral in the dictionary.

To help his brain retain the steps of the Quick Coherence technique he needed to say it, write it and read it in his notebook which he carries with him at all times. Tom reported on his second session that he practices getting Neutral a lot during the day and its becoming a habit. His anxiety is better, he feels calmer and he’s sleeping better. His notebook and cue cards were very helpful to remind him to practice—he posted them around his apartment. At our fourth session, Tom indicated that he was ready to practice getting coherent on the emWave® PC! It was a challenge for him because of his attention deficit issues to look at the HRV pattern and get coherent. Considering all the challenges he was able to get 20% high coherence in less than 5 minutes!

Tom’s embarrassed feelings about being judged for his brain injury deficits often prevented him from communicating with others and getting the help and information he needs. He often misses going on favorite outings because of this. He was very excited to tell me that this time he recognized his embarrassed feeling, moved through it by getting neutral and was able to make the call to get information about a special outing. Recognizing this shift gave the confidence to do it again when the embarrassing feeling came up. He became so successful that he was able to advocate for himself and get the speech and language rehabilitation he very much needed.

By Tom’s seventh session, he was able to maintain coherence on the emWave Balloon Game while listening to the music, an indication that his multi-tasking attention deficit issues were improving. Gaining more control of his attention issues seemed to be the gateway to using coherence to help improve his memory. In subsequent sessions, Tom would practice sustaining coherence hooked up to the emWave® Pro while playing memory games with a deck of cards. Appreciating himself and his accomplishments became part of his daily coherence practice. His ability to think more clearly and make decisions was getting better. He felt confident enough to consider vocational rehabilitation.”