Excerpted from Heart Intelligence: Connecting with the Heart’s Intuitive Guidance for Effective Choices and Solutions; Chapter 11, Social Coherence: Learning to Get Along, by Howard Martin. 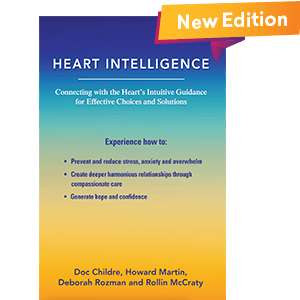 Download the Introduction by Doc Childre and Chapter 1 from the new edition of Heart Intelligence: Connecting with the Heart’s Intuitive Guidance for Effective Choices and Solutions.

In 1996 HeartMath researchers discovered that when an individual is in a state of heart rhythm coherence their heart radiates a more coherent electromagnetic signal into the environment that can be detected by and affect the nervous systems of other people and even animals.

The heart’s electromagnetic field provides a plausible mechanism for how we can “feel” or sense another person’s presence and emotional state independent of body language or other factors.[1]

It was confirming to me when a later study examined whether people trained in heart rhythm coherence could energetically increase coherence in other people who were in close proximity but not touching. This study found that the heart coherence of an untrained participant was indeed facilitated by others who were in a coherent state. It also provided evidence of heart rhythm synchronization between people, or what is called social coherence.[2]

Download the Introduction by Doc Childre and Chapter 1 from the new edition of Heart Intelligence: Connecting with the Heart’s Intuitive Guidance for Effective Choices and Solutions.

Many researchers are interested these days in under-standing energetic social dynamics.

In their paper Social Baseline Theory: The Role of Social Proximity in Emotion and Economy of Action, Drs. Lane Beckles and James A. Coan from the University of Virginia documented the benefits of emotionally-connected interactions between people.[5] I found one aspect of their work particularly fascinating with regard to the energetic influence we can have on one another’s perceptions.

They wrote: The brain modifies sensory perception in ways that bias decision-making to manage energy use efficiently.[6] For example, wearing a heavy backpack makes distances seem further away and uphill inclines seem steeper.[7] In work by Twedt, Hawkins, and Profitt, hill slants were judged as less steep when participants stood next to a friend.[8] Moreover, this effect was moderated by the duration of the friendship—the longer the friendship, the less steep the hill.

In essence what they are describing is that our perception of walking uphill is different when we are in emotional resonance with someone. The deeper the emotional connection, the less steep the hill appears.

Social coherence enables a “collective intelligence” that helps raise the vibratory rate of the individual‘s and the group’s energetic field.

HeartMath has validated over a period of 30 years a number of effective practices for building coherent teams that we use in our training programs. We have found that the more responsible each team member is for their own energies, the better the principles of coherent teamwork have a chance to really work.

Here are three of our key principles.

A key practice is for members to deeply listen to each other without judging, which means temporarily setting their point of view aside as they listen.

Heart connection is on the rise because people around the world are yearning for it. They are tired of the old ways of doing things—societal systems that don’t work for everyone, belief systems that focus on separation and polarization, and a host of other paradigms that maintain the status quo.

It’s also true that there are a tremendous amount of competing agendas in today’s world, including political polarization, media misinformation, climate change, racial injustices, viruses, and wars. Human beings keep inflicting pain and trauma on each other. This is nothing new, but with our global communications systems the world’s problems are often on full display. Nevertheless, there is plenty of hopeful news to consider in the midst of the perceived chaos. Many people are sensing that today‘s collective global stir is part of a transition towards a new consciousness based on care, cooperation, and acceptance. It’s a process of a new world birthing itself in the midst of an old one. Awareness is shifting, people are changing, society is transforming, and a new collective intelligence is emerging.